Sorry! You missed Something Rotten! at Saroyan Theatre 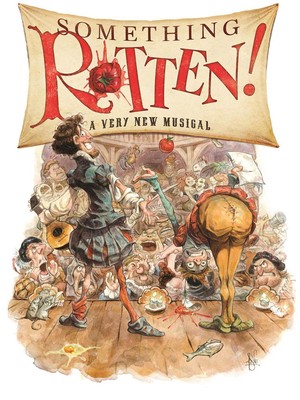 You couldn't ask for a sillier more satisfying show for theater nerds and anyone who loves shows packed with elaborate dance numbers, double entendres and energy to spare.

Why See Something Rotten!?

The year is 1595, and struggling playwrights Nigel and Nick Bottom are planning on taking Shakespeare down a peg or two. Their idea? To conjure up the one type of show that's outside of The Bard's wheelhouse - the musical! An uproariously irreverent and meta portrait of the Renaissance, Something Rotten! tracks the Brothers' shaky progress while gleefully parodying The Great White Way's greatest hits along the way, riffing on everything from Phantom of the Opera to Les Miserables.

All the World's a Stage

This gloriously silly musical first premiered on Broadway in 2015, where it proved a hit with audiences and critics alike, garnering a stunning ten Tony nominations, and winning one for Christian Borle's portrayal of Shakespeare. With another production transferring over to London's West End, Something Rotten is taking it doublets and ruffs on the road in one of 2016's biggest new tours.

Music and lyrics come courtesy of crack brotherly duo Wayne and Karey Kirkpatrick, the latter of whom also co-wrote the book alongside British humorist John O'Farrell. The Book of Mormon director Casey Nicholaw steered the ship for its original Broadway production.

What is Something Rotten! About?

It's tough being a playwright in Elizabethan England, not least because a certain pompous (but honestly rather dashing) rascal called William Shakespeare is hogging all the limelight. Comedies, tragedies, histories...you name it, and he can write it. So what are struggling thesps The Bottom Brothers to do? Well, in their desperation they seek the advice of an aged soothsayer, who advises them to try their hand at whole new kind of theatrical show - a play that incorporates song and dance numbers!

So the Bottoms begin creating Omelette, the world's first ever musical. Unfortunately things don't quite go to plan, especially when that bounder Shakespeare begins poking his nose in.

May be unsuitable for children younger than eight years old.

Two hours and 30 minutes including one intermission

Images are from the Broadway production

I had been anxiously awaiting this show after hearing some of the songs... more

I saw this "musical" in Omaha and have to see it again. Laugh, music the... more

Read all reviews Write a review

Sound good to you? Share this page on social media and let your friends know about Something Rotten! at Saroyan Theatre.