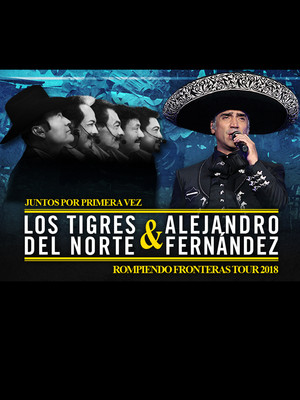 A diverse co-headline bill sees two Mexican legends in their own right share the stage!

Dubbed 'El Potrillo' (The Colt) by his legions of adoring fans and the media, Fernandez has the Mexican musical tradition running through his veins. The son of famed ranchero crooner Vicente Fernandez, El Potrillo has enjoyed his own successful career out of his father's shadows, selling over 30 million albums internationally thanks to his heady blend of mariachi, ranchera and modern pop. Hailed as Mexico's answer to the Beatles, Los Tigres del Norte have been entertaining the masses with their accordian-soaked norteno and corrido since the early 70s.

Sound good to you? Share this page on social media and let your friends know about Alejandro Fernandez and Los Tigres del Norte at Save Mart Center.