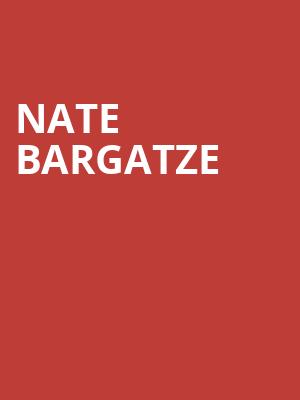 Bargatze has a laid back delivery, retelling actual life experiences and making honest commentary, always exposing both his and others' ignorance. He takes you to each place and time, not missing a detail that will humorously compose his storytelling

Nate Bargatze's A Good Problem To Have Tour

Breakout comedian Nate Bargatze is commonly described as one to watch in the comic circuit. The performer, who hails from Old Hickory, Tennessee continues his hugely popular Good Problem To Have Tour!

Nate is well known for his Comedy Central special, as well as appearing on Late Night with Conan O'Brien and The Tonight Show Starring with Jimmy Fallon. The comedian has also performed at Bonnaroo, SXSW and Moontower, and for the troops in Iraq and Kuwait.

Nate has also produced successful comedy albums with his 2014 release, 'Yelled at by a Clown', landing at number two on the Billboard Top Ten Comedy Charts. In 2019 Nate joined a plethora of other comedy stars and released his first hour-long special, The Tennessee Kid, on Netlfix.

Sound good to you? Share this page on social media and let your friends know about Nate Bargatze at Saroyan Theatre.